The final quarter of 2018 saw sharp moves in US equities and bonds. The S&P500 fell around 20% from its peak and the US 10-year bond yield declined from 3.24% to 2.55%. In view of the fact that asset prices are forward-looking, these moves have sparked fears of a US slowdown, or even a recession, in the coming year.

What is the probability of a US recession?

Based on asset class moves in previous recessions, JP Morgan recently published a report in which it estimated the probability of a recession currently priced in by markets across various asset classes. Their analysis shows that equities (S&P500) and bonds (USTs) are now pricing in over 60% chance of a recession based on the past 11 historical experiences.

Figure 1. Probability of a recession as currently priced in across asset classes

While this analysis is informative, I do not believe that the probability of a recession is anywhere close to 60%.

In the case of equities, the market has fallen from high valuation levels. The chart below shows the Hussman PE of the S&P500 (PE ratio based on peak earnings). 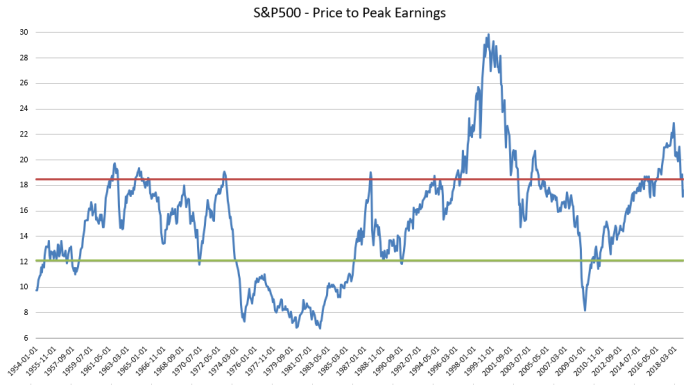 Based on this measure, the S&P500 reached its most expensive level since the 2000 tech-bubble in early 2018. Equity prices are a function of future earnings and the discount rate applied to those earnings. With rates shifting materially higher in 2018, the higher discount rate finally took its toll on the market resulting in lower valuations. Given how expensive the market was, a fall in the market is not as significant an indicator of recession as it would be during a more “normal” valuation period.

The bond market is also less informative in a world of quantitative easing and ultra-low interest rates. The US 10-year yield (currently 2.7%) is low in the context of US economic fundamentals. With the Federal Funds rate at 2.5%, US core inflation at 2.2%, wage growth at 3.2% and unemployment at its lowest level since 1969, the US 10-year yield should theoretically be much higher. In fact, the current 10-year yield is below money market yields (US LIBOR is at 2.79%).

However, the US 10-year yield is not low in the context of current developed market bond yields. Ten year bond yields in major economies such as Germany (0.22%), Japan (0.02%), Switzerland (-0.15%) and the UK (1.27%) are at much lower levels than the US. Within the developed market cohort, US bonds are attractive and there is a limit to how high US bond yields can rise in this global context.

Fears of a recession will dissipate in the coming months

The global economy is highly leveraged and has grown accustomed to ultra-low interest rates since 2008. In this context, the rise in US rates does increase the risk of a US – or even global – recession. However, given how expensive the equity market was, one cannot extrapolate an economic downturn from the recent correction. The market downturn has resulted in a more dovish tone from the US Fed. Whereas both the Fed and the market were previously expecting 3 rate hikes in 2019, the market is now indicating that rates will remain flat this year and are expected to be cut in 2020.

In my opinion, these recessionary fears are overblown and I would expect the recent sharp moves in interest rates to reverse in the coming months. Economic growth, inflation and wage growth all point to a resumption of the US rate hiking cycle by the middle of the year.

2018 was a good year from a performance perspective. In the Fixed Income space, the funds I currently manage (Income, Bond and Hedge Fund) outperformed their benchmarks and ended the year close to the top of their respective categories.

The year started on a high-note, buoyed by the strong rally following the ANC elective conference in December 2017 – an upshot of a welcomed political change coined as “Ramaphoria”. Bonds started the New Year around fair value, while the Rand had already moved to expensive levels. As the rally continued in the first quarter, the Rand strengthened below R12/USD and SA 10-year bond yields lowered to around 8%. At these levels, local bonds and currency were regarded as expensive – belying the severity of South Africa’s fiscal problems and poor growth prospects. Against this backdrop, we trimmed our SA risk position and increased USD exposure. The market corrected in the second quarter and remained mostly range-bound in the second half of the year.

Our Fixed Income funds have performed around the top quartile in most years, which has seen the longer term performance come in around the top decile. We have achieved this with a low level of volatility and drawdown relative to peers. A client recently asked for a comment on the drivers of our long term performance and I put it down to 3 main reasons:

The philosophy of “Diversified Alpha” has delivered an attractive performance signature over the long term, despite a blip in late 2017. This philosophy, combined with high credit quality and a focus on avoiding expensive asset classes, has controlled volatility and limited drawdowns. While our funds tend to forego a portion of the rally and may never experience blowout years, our Fixed Income approach is robust and sustainable over the long term.