Much to the consternation of my friends and family, i have been a Trump “supporter” since August last year. Not so much a supporter as someone who was willing to defend his policies and often his behaviour. I defended his behaviour due to my intense dislike for career politicians. I defended his policies as I believed that globalisation has had a significant impact on the makeup of the United States economy and that Trump’s signature policies had the potential to gain support from those negatively impacted. Those who have been surprised by the rise of Trump, which is almost everyone in media and politics, have not been able to acknowledge the extent of and impact of the economic shifts which have taken place since the 1980’s.

Last August a GQ article by Drew Magary on a Trump rally in Oskaloosa Iowa highlighted to me the extent to which the resentment towards the current economic paradigm had grown . It showed how Trump was taking advantage of real economic concerns. Oskaloosa is a place i have never heard of but is emblematic of huge swathes of America that has been left behind economically and where the people are angry. Magary observes that “pretty much everyone at the Trump picnic believed that America sucks.” This level of disaffection is hardly surprising given the extent of the economic shifts since the 1980’s. Well-being is a relative concept and the economic policies of the recent decades has seen the middle class stagnate and income inequality skyrocket.

Around the same time as the GQ article, Scott Adams (the creator of Dilbert) began to blog about Donald Trump, predicting that he would win the general election. This was a point when no one was taking Trump seriously. It was a time when Ben Carson was “leading” in the polls. So while most of the media were taking a crazy person like Ben Carson seriously and writing off Trump as entertainment, Adams began chronicling the method to his apparent madness. Adams is trained hypnotist and was able to understand the levels at which Trump’s skills of persuasion were operating. Adams describes Trump as the “best persuader he has ever seen” and has been showing the world that Trump has the potential to win the election.

The Impact of Globalisation

In the U.S. there have been winners and losers of the move towards global free trade and the U.S. policy of uncontrolled inward immigration of low skilled workers. The mainstream economic view has been that immigration and free trade are an unalloyed good. Trade and immigration have helped grow total size of the U.S. economy, but the distribution of those gains has been highly inequitable. The US economy has grown 300% in the last 25 years while median household income is virtually unchanged. Corporate profits as a share of the economy have moved up to record highs while the share to salaries and wages has been moving lower. I believe that trade and immigration have been the driver of rising income inequality within the U.S. and the stagnation of the middle class.

Over the last 15 years the United States’ manufacturing base has been decimated as China have become the world’s factory. The number of US manufacturing jobs decreased by almost 6 million in the 2000’s. Manufacturing has historically been a large source of working class jobs so the impact of having a third of those jobs disappear should not be understated. The professional classes work higher up the value chain so they have retained jobs while benefiting from ever cheaper TV’s, clothes and phones. Unlike Donald Trump, I don’t believe that America has been a net loser from trade as U.S. companies profited from their access to global markets. Apple pays $200 to Chinese manufacturers to make the iPhone 6 and then sells it for $650+ all over the world. Where the U.S. has a competitive advantage they have benefited from an increase in exports. China has a competitive advantage in the cost of labour, so it is only natural that labour intensive areas of the economy like manufacturing would shift there. The segments of society which lost jobs to China are worse off. No discussion Ricardo’s theory of comparative advantage could convince them otherwise. 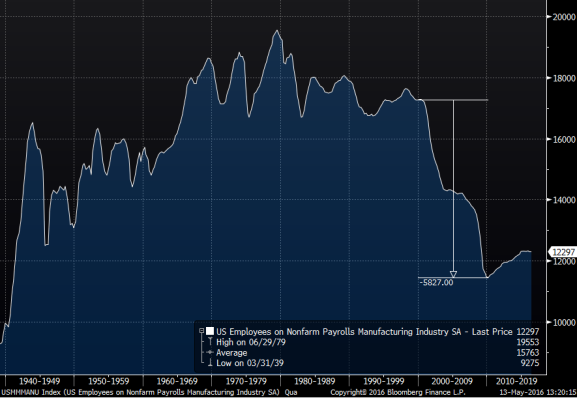 The Hypocrisy of the Elites

I don’t actually “support” Trump. Having seen footage of his rallies i doubt whether someone like me would be able to get out of one of them unscathed. My defence of Trump has not been due him or even his policies. I am actually in favour of globalisation given its positive impact on overall global prosperity and developing countries, even if the transition to open economies has been poorly managed and the gains have not been shared. My defence of Trump is due to the hypocrisy of the political and economic elites. They have implemented trade and immigration policies which protect them from competition while exposing the working classes to the full forces of globalisation. Drew Magary and Scott Adams helped me see how Trump could take advantage of this hypocrisy to win the Republican nomination and maybe even the upcoming general election.