“Morality binds and blinds. It binds us into ideological teams that fight each other as though the fate of the world depended on our side winning each battle. It blinds us to the fact that each team is composed of good people who have something important to say.” 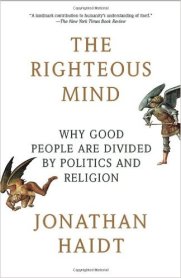 I read “The Righteous Mind” some time ago, but with all the polarization around student protests here and in the USA the issues seem very relevant. I thought i should copy some clippings from my kindle so that people get some of the (my) highlights and maybe they are encouraged to read the book:

Clippings from “The Righteous Mind”

The book defines a theory of morality and attempts to explain why people have such different ideas of right and wrong. Haidt believes that moral judgments are an automatic, intuitive, response. The reasoning for the response comes after. You make a moral judgement first, and then afterwards look for facts to support your decision. That is why it is almost impossible to change someone’s mind with a debate or argument. The facts are almost irrelevant.
It was his theory of the 6 forms of “morality’ that was most useful to me:

• The Care/harm foundation makes us sensitive to signs of suffering and need; it makes us despise cruelty and want to care for those who are suffering.
• The Fairness/cheating foundation makes us sensitive to indications that another person is likely to be a good (or bad) partner for collaboration and reciprocal altruism. It makes us want to shun or punish cheaters.
• The Loyalty/betrayal foundation evolved in response to the adaptive challenge of forming and maintaining coalitions. It makes us sensitive to signs that another person is (or is not) a team player. It makes us trust and reward such people, and it makes us want to hurt, ostracize, or even kill those who betray us or our group.
• The Authority/subversion foundation evolved in response to the adaptive challenge of forging relationships that will benefit us within social hierarchies. It makes us sensitive to signs of rank or status, and to signs that other people are (or are not) behaving properly, given their position.
• The Sanctity/degradation foundation evolved initially in response to the adaptive challenge of the omnivore’s dilemma, and then to the broader challenge of living in a world of pathogens and parasites. It includes the behavioral immune system, which can make us wary of a diverse array of symbolic objects and threats. It makes it possible for people to invest objects with irrational and extreme values—both positive and negative—which are important for binding groups together.
•The Liberty foundation obviously operates in tension with the Authority foundation. We all recognize some kinds of authority as legitimate in some contexts, but we are also wary of those who claim to be leaders unless they have first earned our trust. We’re vigilant for signs that they’ve crossed the line into self-aggrandizement and tyranny
Liberals focus on the Care and Liberty foundations, while they are not too concerned with the rest. They may even question whether loyalty and authority are even forms of morality. Haidt argues that conservatives have a broader view of morality as they use all six forms of morality almost equally. This creates “moral capital”, which he is essential to nation building, as it leads to a suppression of free riders. But it can have a downside in that does not necessarily lead to the equality of opportunity. Conservatives also may not notice victims or understand the need for change.

I personally think that this is a very useful framework and that it makes this book essential reading.