1) These Chinese Stock market has crashed after a phenomenal bull run.
2) The Chinese equity bubble had the potential to boost growth, but now that the market has crashed this hope disappearing.
3) Growth has been driven by debt since 2007, which means an increased risk of financial crisis.
4) China has been the main driver of world  growth in recent years, but that growth will slow with knock on effects on global growth.

While the financial markets have been occupied with the turmoil in Greece, a potentially more serious development is the crash of the Chinese stock market after its  phenomenal run. Up to May 2015 the Chinese market had delivered 154% over a 12 month period and valuations of medium and small companies reached extremes. The market began selling off on the 15th of June and the crash continued despite measures by the central bank and government to prop up the market through the use of interest rate cuts and stock buying programs. The broad market has fallen 32% from its peak, a tremendous destruction of value given that the Chinese market is second only to the US in terms of size. Many companies have taken the strategic decision of suspending trading in their stock in order to prevent them falling further. Currently over 1000 stocks, out of a listed universe of around 3000, have suspended trading in recent days. This level of of suspension of trading is unprecedented as the action generally used for companies in Liquidation or Business rescue. As a comparison there have been 5 suspensions on the Johannesburg Stock Exchange for 2015 to date. While the market has fallen 32% in less than a month, the crash is actually understated due to the number of stock suspensions.

China’s economy slowed during the 2008 financial crisis, but then recovered strongly due to government stimulus and credit growth. Growth has slowed significantly in recent years, but at 7% it is still very high for an economy of its size. Expectations are that economic growth in China will remain strong (between 6% and 7% in coming years) and the equity bull market reinforced these beliefs.

The Chinese equity market crash is significant as the bull market had the potential to boost economic growth. New stock offerings (IPO’s) and stock issues by listed companies pull savings into businesses, which they can can then invest. High valuations lower the cost of equity and therefore the required return on prospective investments. This causes companies to ramp up investment and this in turn drives growth. There was some hope that the deluge of money being pumped into the equities would stem the decline in GDP growth, but with the market crash this hope has now disappeared.
It is critical for China that their growth does not slow as since 2007 they have amassed a large amount of debt. In the 5 years leading up to the financial crisis, China grew at over 10% p.a. The economy began to slow in 2007 and growth dipped to 6% in 2009. China reacted to this by significantly increasing borrowing and investment in an attempt to maintain its high growth rates.  They succeeded in boosting growth, but at the expense of massive increase in the debt levels. A McKinsey report earlier this year highlighted the extent of the borrowing binge (http://www.mckinsey.com/insights/economic_studies/debt_and_not_much_deleveraging). The debt to GDP ratio has increased from 158% in 2007 to 282% in 2014, which means that debt levels in China now exceed those is developed markets such as the United States, Germany and Canada. 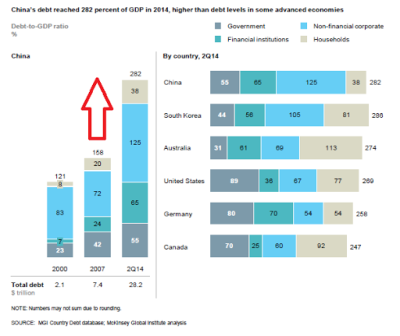 The speed and quantum of the debt increase has only a few precedents in history, with no nation in a comparable position able to escape an an economic slowdown and most experiencing a credit crisis. (http://on.ft.com/1aYv5KM). A country with a high level of debt is very dependent on growth as any slowdown can impact the ability to service the debt load, which would precipitate a financial crisis.
While China’s debt fueled boom has been under scrutiny for several years, investors have generally believe that the government will be able to deal with any fallout due to the low level of government debt (55% of GDP), the current account surplus (more exports than imports) and the size of their foreign exchange reserves ($3,7 Trillion) . Despite these fundamental positives and the fact that the economy and credit growth has continued to grow at a rapid pace this year, I believe that a slowdown is now inevitable and there is a meaningful risk of a hard landing brought about by a financial crisis. Over the last 5 years China has contributed 30-40% of the world’s economic growth and the consensus among economists and market participants is that this is likely to continue. A significant slowdown will be quite unexpected with massive knock effects for the global economy.